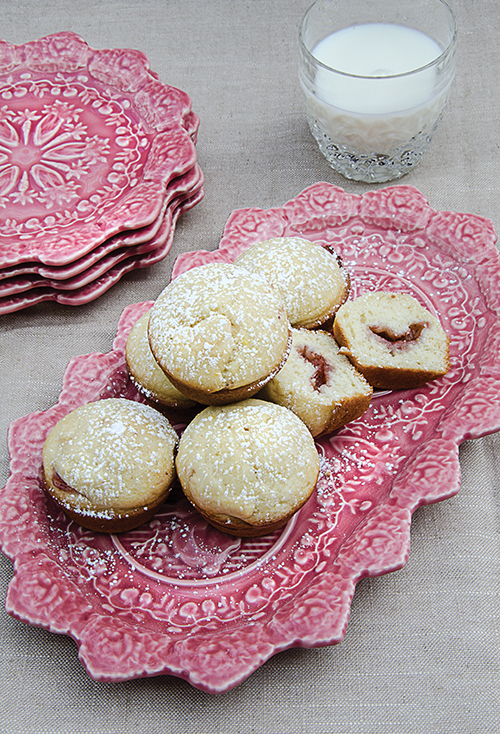 There’s nothing like a warm muffin from the oven to say good morning to your family or guests.

This is a basic muffin recipe but adding your favorite flavor of jam or preserves gives an ordinary muffin some punch! Jam muffins have been around for years and they have always been a delicious place to hide strawberry jam.

In a large bowl sift together flour, baking powder and salt. In a separate bowl, mix together the milk, egg, oil, sugar and orange zest. Stir the liquid mixture into the flour mixture until moistened. You can use an electric mixer on low.

Spoon about 2 tablespoons of the batter into greased, regular-sized muffin tins. Drop about a teaspoon of jam on top of batter then top with about two more tablespoons of batter. Bake for 15 minutes in a preheated 400⁰ oven. Let cool in tins for 5 minutes then remove and cool on a rack. If desired top with sifted confectioners’ sugar.

This recipe was originally printed in Celebrate Home Magazine (Spring 2013). Click here to download all the issues for free. Photo by Cindy Dyer.

When I started this blog, I said it would not just be about food, although food comes into play when you write about hospitality. I knew there would be stories about people, love, humor, neighborhoods, you name it, probably all centered around food. Here is one of those stories.

Peggy and Bill McCarthy are givers. Plain and simple. They’re not really into food or fine cuisine; in fact they don’t eat meat, or much. They “eat to live” as the saying goes. Food is not important to them, but people are important to them.

When there’s a crisis or a celebration Peggy knows it’s food that soothes the soul or celebrates a life. She works like a nut in the kitchen preparing food for new mothers, those who have lost loved ones, those who have no one, and those who deserve a big celebration. Her husband Bill is the support staff. As soon as Peggy says Costco, he has the car keys in his hand. He shops, lugs, rallies volunteers from his Knights of Columbus Padre Pio Council, and sets up the bar if the occasion calls for it.

Peggy is also a realtor, but it doesn’t stop at the sale. In fact, the sale (or a non-sale) is the beginning of a friendship she cherishes. Such is the case with a seminarian from Mount St. Mary’s Seminary, Brian McAllister, who was ordained a deacon last week in the Catholic Church. Peggy sold his townhouse he bought years before he entered the seminary. Then, she decided to throw him a reception worthy of the occasion after his first Mass as a deacon preaching his first homily. She asked me if I would help arrange the platters of food. “How about some pretty cheese and fruit platters?” she asked. Easy to be inspired when Peggy asks.

Look for the Peggy’s and Bill’s in your lives. Be thankful for them and learn from them. These kinds of people make us feel good about ourselves and bring out the best in us. That’s hospitality!

…Outside that is. It’s time to move outside to the deck, yard, or porch. I needed a quick appetizer last night and it doesn’t get any easier or fresher than this.

Slice French bread into thin slices and arrange on platter. Assemble by putting a slice of mozzarella cheese, then tomato, then salt and pepper to taste, then top with basil leaf.

Visitors are coming from…

Links to Check Out

Links to Check Out