This is the first time we welcome a guest blogger to Kelley Hospitality. But he is not just any blogger, he is” Bobby G.” (Not to be confused with Bobby F[lay] who both Bobby G and I really like!)

Some of you might know I have an ongoing research study about whether or not hospitality is nature or nurture? Is there a hospitality gene? I have volumes of anecdotal evidence, but I will say this: my brother, Bobby Garneau, a.k.a. “Bobby G,” also inherited the gene.

Bobby Garneau and big sister Barbie Garneau Kelley. He is the brains and she is the flash!

So, without further adieu, I welcome my first guest blogger who just happens to be my brother. Ladies and gentlemen, boys and girls, I present: “Bobby G”

The seeds were planted last winter when my friend Todd Reider asked me if I could make him a great BBQ sauce for a chicken and pig roast that he was having. Todd has had some of my dishes but quite frankly he gives me more credit than I deserve. Todd is a great cook in his own right so I could not resist making him the best sauce that I could.

Now you have to know one thing. We live in North Carolina where barbecue is a noun (not a verb) and barbecue sauce is vinegar based…period. The sauce turned out great, in fact, so great that Todd started testing it with various people to see if they thought it was as good as he did.

Our discussions turned to how best to market this most excellent sauce and we agreed that we had to start to do some pig cookin’s and serve barbeque with our great sauce. We started researching pig cookers, talked to folks on Craig’s List, looked at others alongside the road, and visited various pig roasts to see what the different setups were.

We ended up finding a guy in Pikeville, North Carolina, which is about 10 miles outside of Goldsboro. Many would argue that the best barbecue in the world is in Goldsboro which is home to Wilber’s BBQ for more than 40 years. Wilbur cooks whole hogs on an oakwood fire, and serves true Eastern NC BBQ, using the whole pig and chopped…and it does not get any better than that. BBQ and pig cookers is a way of life in these parts, and we found a guy named James Ballance that has been custom building pig cookers for more than 10 years.

When we went to see James, he had about three cookers that were in various stages of “manufacturing.” He had steel drums of various sizes and shapes to choose from. We chose the biggest one he had—a five-foot long, by four-feet wide drum that was shaped like it was flattened out a bit (instead of round). We then chose to have the grill open to the side. We wanted two side burners spaced far enough apart so we could fit two big pots on them at the same time. We wanted room for two propane tanks, a smoke box the size of the smoke stacks under the grate, and a complete trailer lighting package and title so it could be licensed for travel. 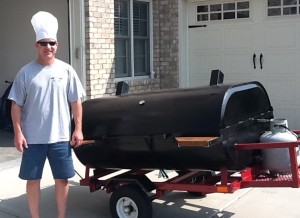 We took delivery on the Saturday of Labor Day weekend 2011. The next day we put the word out for an impromptu pig pickins’ for that same Sunday evening. We could not wait to break in the cooker and start making some BBQ like real North Carolinians. With such short notice we did not try to cook a whole pig, but rather opted for pork shoulders (Boston Butt), country ribs, and chicken.

"With such short notice we did not try to cook a whole pig, but rather opted for pork shoulders (Boston Butt), country ribs, and chicken. "

BBQ Tip: We coated the shoulders in seasoning and brown sugar, wrapped them and let them sit in the fridge overnight, and cover the ribs and chicken with a generous coat of dry rub.

Now we were ready for the christening of the cooker. It was Sunday of Labor Day weekend. We went to church and rushed home to fire up the grill to a constant temperature of 250 degrees.

So just for the record, it does not get any better than that—God, a holiday weekend, a pig cooker, lots of meat, and beer…a glimpse of heaven, no doubt!

Along with the pork shoulder (BBQ), the country ribs, and the chicken, we made a pot of beans and potatoes and baked beans. For an appetizer, we served deviled eggs. Have you ever noticed that anytime deviled eggs are brought somewhere, they are the first to go? Everyone loves deviled eggs! (Recipe below.)

"We chose to have the grill open to the side. We wanted two side burners spaced far enough apart so we could fit two big pots on them at the same time."

The meal turned out terrific, and we definitely learned much stumbling our way through preparing dinner for 30 neighbors. Now, about that BBQ sauce…that was our excuse for purchasing the pig cooker, so I guess we need to start planning some pig pickins’…not sure I’m up for all that work, though!

Mix cooked egg yolks with all ingredients and stuff back into egg haves. Place a piece of sliced olive on top of each egg, then sprinkle with paprika.

Editor’s Note: Read more about Bobby G and the family Thanksgiving he orchestrated and hosted. And, don’t believe what he said at the end of this blog about “not sure I’m up to all that work.” Another event will be right around the corner! What about that sauce?